Single-Phase Vs. 3-Phase Generators – The Basics

Single-phase and 3-phase generators may be cousins in the power-producing family tree, but businesses and building managers shouldn’t make the mistake of conflating the two for their facility’s energy needs.

While both can function to generate primary power for commercial and industrial equipment for off-grid applications or alternative energy in the event of outages, people continually wonder about the differences between single-phase and three-phase generators, what each can power and for how long.

These are natural questions. As a business or property owner, a facility manager or simply an individual looking to keep their operations and departments running around-the-clock without the worry of expensive downtimes or production interruptions, understanding the three-phase motor difference is key.

What’s more, if you pick the wrong type, you’re bound to experience more pain points than you had before — from weak and spotty power to sky-rocketing energy bills to an entire malfunctioning fleet of generators. 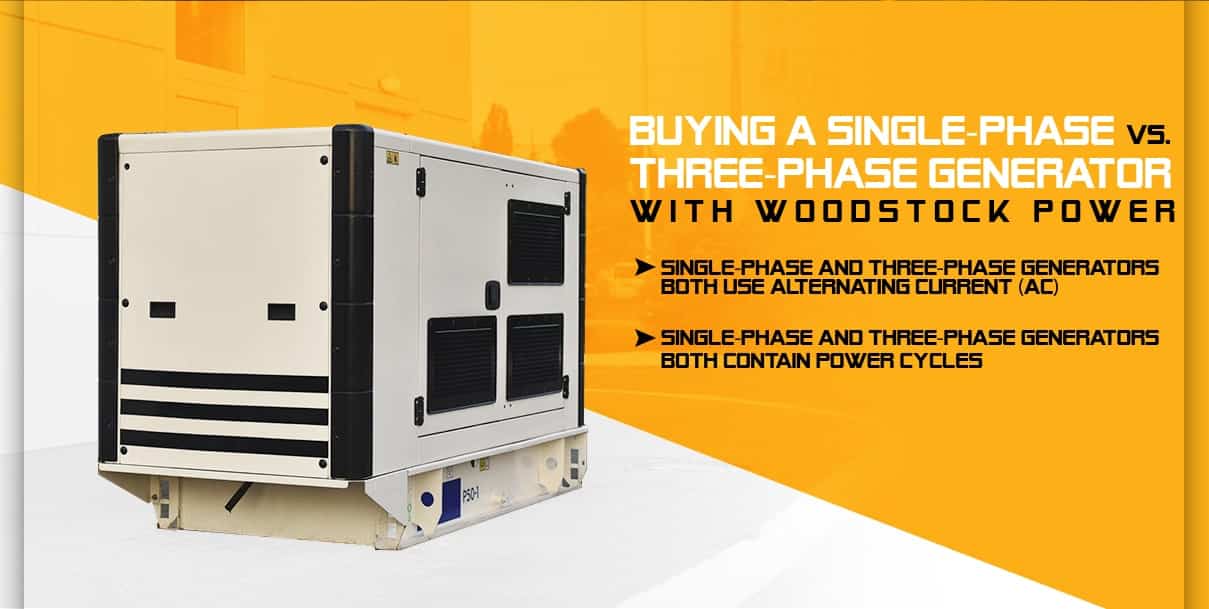 Buying a Single-Phase vs. 3-Phase Generator With Woodstock Power

The best new and used generator purchases are informed ones. What is a single-phase generator, and what is a three-phase generator? Woodstock Power walks you through their parallels, differences and applications, so you can make the proper selection for your operations.

Before we get into the technicalities, here’s what you need to know about the similarities that form the base of both these generator types:

How a Single-Phase Generator Provides Power

As its name suggests, a single-phase generator uses a single AC wave described above to create its kilowatt outputs.

This is the essential difference to this generator type. Since they only work from one “line” of power produced between a small number of conductive wires — sometimes as minimal as two — and that line has up-and-down output cycles, single-phase generators will not provide as steady a power source when compared to its 3-phase counterpart.

Luckily, even at its lowest point, single-phase generators don’t wholly “drop out.” Low cycle currents should typically remain unnoticeable unless running this generator type at overcapacity. This is why you don’t notice lights flickering in a room while a lamp or overhead fixture is on. Commercial lights are a staple application for single-phase generators, yet they cycle so fast, flickering caused by current low-points are imperceptible to the human eye.

In total, a single-phase generator is one made up of the following characteristics:

How a 3-Phase Generator Provides Power

A 3-phase generator provides its power through three sequenced currents running at the same time. Those currents do require a stronger underlying voltage, but it also means you’ll have a continuous, uninterrupted stream of power generated from your unit.

What’s more, that power is not only more constant, but it’s stronger, as well. A three-phase generator patterns its lines to cycle at 120-degree offsets and will be able to maintain power for more intense applications or mission-critical machinery. The 120-degree proration means that as one current’s cycle is at its lowest, another will be at its highest, offering complementary wavelengths that work in tangent to deliver stable amounts of power.

3-phase generators strike a Goldilocks balance between power provided and cost to build and maintain. They have the added bonus of being more versatile, too. Operators can opt to sync all three current cycles to power one large piece of industrial-grade equipment. Or, they can connect three smaller pieces of equipment to individual current lines held within the same three-phase generator.

The former is often the case in factories and industrial applications to power a single machine or system, while the ladder works in things like multi-story office buildings to power elevators and the office’s suite of desktops.

In total, a 3-phase generator will be comprised of the following features: 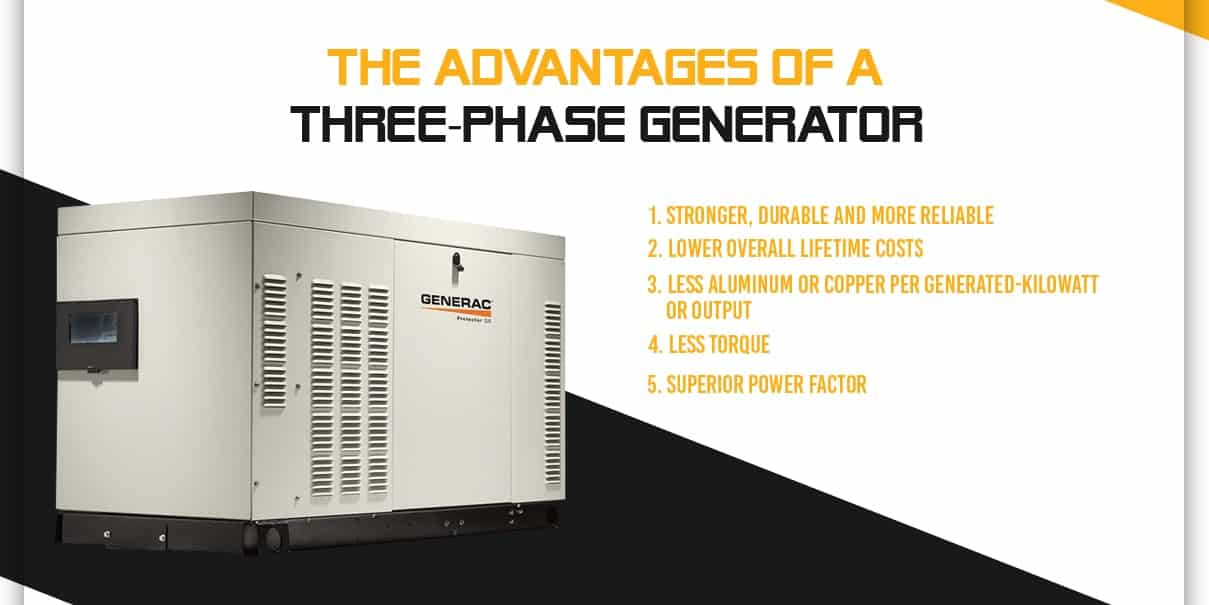 The Advantages of a 3-Phase Generator

Understanding the functional and mechanical benefits of a three-phase generator plays a significant role in picking one that works best for you.

However, while single-phase and three-phase power are often pitted against each other, it bears noting that the defining element in your purchasing decision is what you will use this generator for. It’s an intuitive question, and it will help you see the actual benefits of the generator for yourself rather than relying solely on confusing spec sheets or flashy salespeople.

It bears repeating that the most significant advantage of 3-phase generators is their high levels of power output and even higher levels of efficiency. They are the workhorses of industrial equipment, heavy machinery, large office buildings and facilities alike, delivering steady streams of electricity that are staples in high-demand operations.

While they may be more expensive to acquire upfront, 3-phase generators are the calculated winners when it comes to maintenance, system updates and general upkeep. They are more stable and resilient due to less wear-and-tear from torque, heavy loads, pulsating distribution and more.

What’s more, when you factor in cases of system downtime or production halts due to single-phase degeneration and patches, 3-phase generators become even more cost-competitive.

3. Less Aluminum or Copper Per Generated-Kilowatt or Output

This initially sounds confusing, since there are more wires involved in a three-cycle generator compared to a single cycle’s traditional one or two. However, 3-phase generators actually have what’s called a lower power transmission, meaning they need less conductive materials to produce the same amount of power at the same level of volts.

Less torque in your generator means less mechanical vibrations. This, in turn, helps complement the superior reliability of the three-phase generator over its one-phase counterpart.

Extensive levels of torque will cause a domino-like spiral of effects on your unit. Your AC waves become disrupted and less stable, as magnets shift out of place or other weights and forces damage mechanics, which then means irregular cycles. With harmonious cycles as the backbone to AC generator types, you’ll end up with a less sturdy and less functional three-phased unit.

Most 3-phase generators average a .8 power-factor rating. That’s nearly 1.5 times higher than the typical power factor of a single-phase generator of the same size and weight. These higher power-factor numbers mean larger final outputs capable of handling your industrial applications.

When Should You Choose A Single-Phase vs. 3-Phase Generator?

The most significant factor in choosing a single-phase or a 3-phase generator is what you intend to use it for. More specifically, consider what kinds of equipment or devices need to be powered, how often and for how long.

When You Should Choose a Single-Phase Generator

Business owners and facility managers should consider opting for single-phase generators when applications don’t require power over 240 kilowatts. Generally, single-phase generators are not meant for scale. They are also not ideal for powering advanced or around-the-clock equipment unless that equipment comes highly specialized or is somehow buffered by another power source.

Building managers or operators aren’t recommended to utilize single-phase generators for the majority of their facility’s major systems. Those systems include things like heating, cooling, air ventilation, elevators, large electronic systems and industrial or production equipment. Each of these will likely be unable to function without a proper high-output source, like what’s provided with 3-phase power.

Single-phase units are only recommended for low-power appliances and equipment, such as:

When You Should Choose a 3-Phase Generator

3-phase generators are the clear choice for commercial and industrial usage. They can withstand longer run times, sustain higher voltages and perform with a maximum degree of stability and reliability.

It is especially imperative for business owners and facility managers to outfit their buildings with 3-phase generators in the event of a power outage or emergency. In some industries, a power outage can cost thousands in profit-cutting expenses per minute — not to mention, in some cases put lives at risk. Without a backup power source, your facility risks lost revenue and many other business-critical liabilities.

You should choose a 3-phase generator if your plant or operation relies upon any of the following: 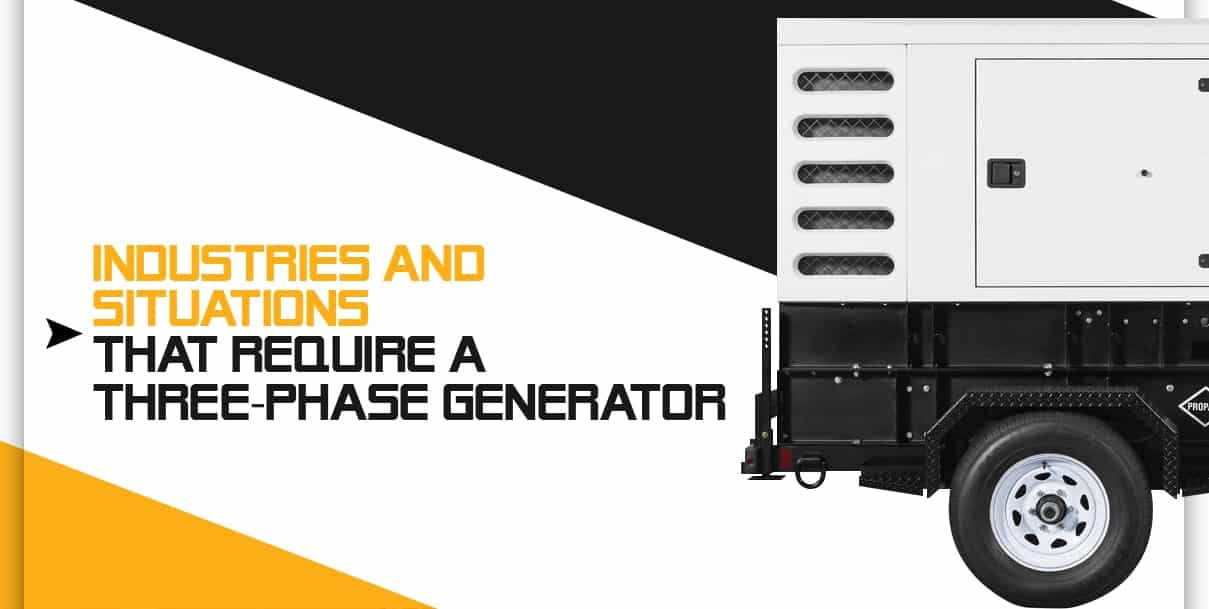 Industries and Situations That Usually Require a 3-Phase Generator

3-phase generators are essential for many business types and situations. Without proper 3-phase generators to backup operations, augment specific pieces of equipment or produce power in the field, it is impossible for the following industries to function at peak productivity.

Numerous studies have found manufacturers have the most to lose from a power outage or disruption. Whether small-batch production lines or an around-the-clock fabrication facility, manufacturing knows how vital a reliable, industrial-grade source of power is. Facility managers work to ensure their power grids are secure and sustained, as well as buffer them with their own backup three-phase generators to keep machines operational and computer systems regulated. Without these, a facility will be rendered lifeless.

Perishable food and beverages rely upon continuous power to keep cold-refrigeration and other preservation storage methods working. With inventory extremely liable to contamination and shortened or tainted lifespans, a single power outage can force you to throw out thousands of products.

Food and beverage processing managers should have a complete suite of 3-phase backup generators on-premise to assist in these times of need — at the very least to keep temperatures regulated and air ventilation cycles sterile.

The large and complex electrical systems outfitted in multi-story buildings require an equally dynamic system. 3-phase generators are the natural choice for electrical engineers and building managers alike to regulate power on each floor. What’s more, these power levels must be consistent regardless of the story or its electricity demands. Only 3-phase generators carry the versatility to distribute currents to multiple applications, as well as with the steadiness and uniformity high-rises need.

Few sources of power can meet the requirements of agricultural work. Electricity is necessary for farms to function in nearly every branch, from temperature and ventilation regulation in livestock buildings to powering irrigation systems or planting and harvesting machinery. With these operations happening on the daily, static and portable three-phase generator units are the go-to powering choice to complement current systems or boost the functionality of field equipment attachments and tools.

As cloud-based and outsourced data storage continue to rise, so, too, does the importance of powering those centers. These massive facilities cannot risk a power outage — even for a few minutes — as outages spell the potential for irreversible records loss or damage on top of subsequent liability complications. Those in the finance, telecommunications, healthcare or IT sectors need reliable data centers fueled by three-phase power sources to keep data transactions smooth, secure and glitch-free.

You have questions, and we have answers. Choosing the right phase generator for your property is not something you decide on a whim. Woodstock Power can help you consider your business, plant’s, farm’s or facility’s exact grid and power layout and operational needs to find the right generators to tie it all together.

We’re always here to answer your inquiries and protect your business from expensive downtime. Reach out today through our online contact form or at (610) 658-3242. We can’t wait to work with you.