When buying a new generator, you’ll likely see that different types have different Environmental Protection Agency (EPA) Tier levels. The Tiers relate to the amount of pollutants the generators can produce while meeting the emissions standard. To understand what these Tiers mean for your generator, you should note the EPA diesel emissions standards and how they change over time. A greater appreciation of EPA Tiers will make purchasing models that emphasize generator emission reduction easier.

The EPA regulates emissions for many types of engines — both vehicular and non-vehicular. This especially pertains to backup power generators, which are known as nonroad engines. Within this category, the EPA has different rules for compression-ignition engines, which run on diesel, and spark-ignition engines, which often use natural gas and, if converted to accept it, propane.

Because commercial generators can produce more power, they also consume more fuel and produce greater emissions. Therefore, when getting a backup generator for your business, be sure to check generator emissions requirements in your area and whether your model meets the latest requirements from the EPA based on Tier ratings.

The Difference Between EPA Standards and CARB Standards

CARB standards can be more stringent than EPA standards — though in regard to diesel generators, they are currently closely aligned with EPA standards. Whether you are in California or not, a CARB certification on a generator is always a positive sign that the engine is designed to create fewer emissions. In states outside of California that also have more stringent EPA emissions requirements when it comes to both diesel and natural gas generators, newer natural gas generators may be manufactured and sold as “EPA Certified”, while diesel generators will most likely fall under “EPA Tier 4 Final” classifications. 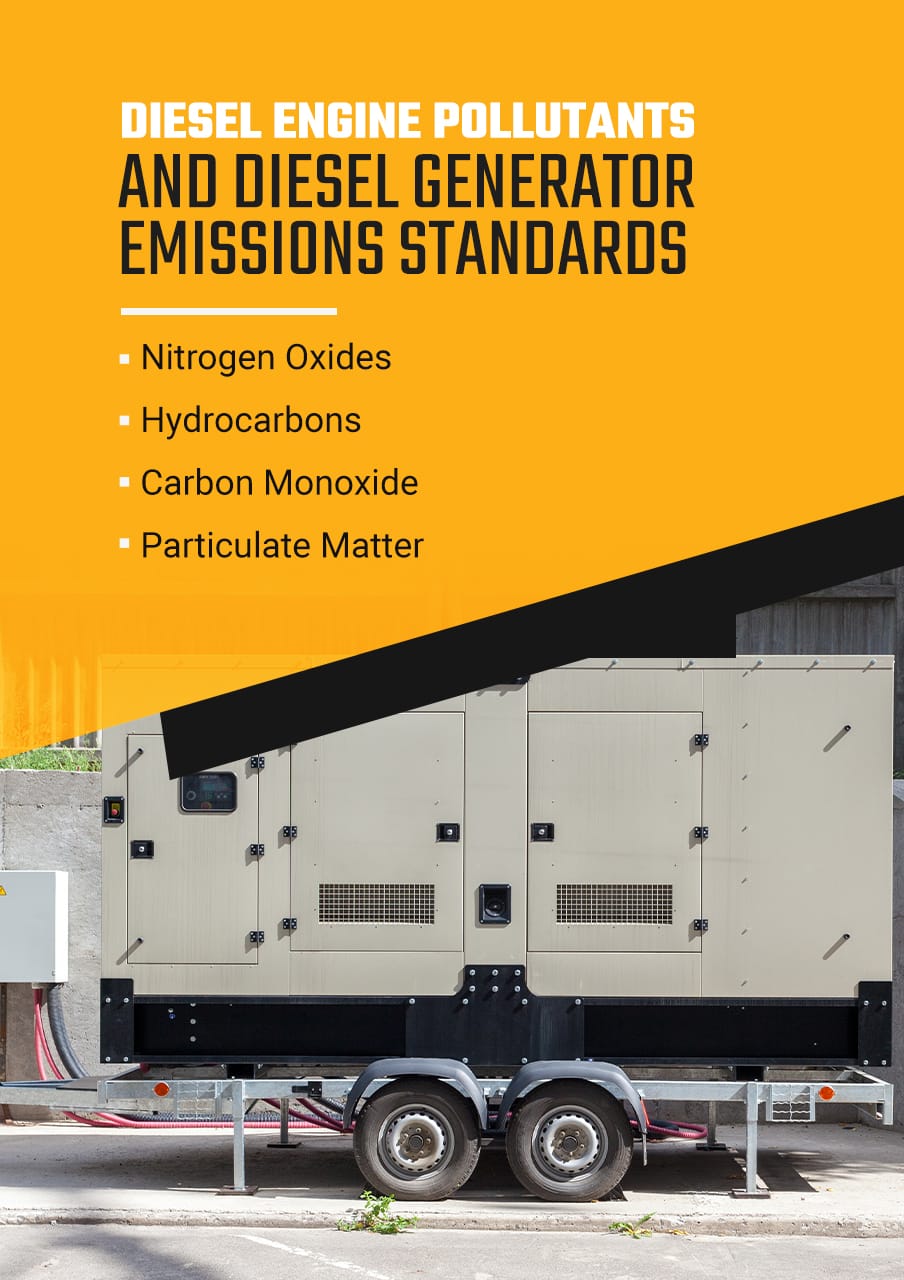 Diesel engines produce by-products from burning the fuel that contribute to particulate matter released into the atmosphere. The EPA standards set out to regulate these pollutants by putting limits on the amount generators can emit. As technology in fuel-burning became more efficient over time, the Tiers required tighter restrictions on emissions levels. The pollutants covered in the EPA Tiers are the following:

Nitrogen oxides (NOx) include both nitrogen oxide (NO) and nitrogen dioxide (NO2). NO is an odorless, colorless gas. NO2, on the other hand, has a distinctively pungent smell and a reddish-brown color. Though both are dangerous to human health, nitrogen dioxide poses a much greater threat than nitrogen oxide. NO2 can irritate the lungs and raise the chances of getting respiratory illnesses.

While diesel engines produce more NO than NO2, the former eventually evolves into the latter after introduction into the atmosphere. Consequently, while initially less dangerous, nitrogen oxide will eventually become the more hazardous form, nitrogen dioxide. Both forms of nitrogen oxides contribute to the production of acid rain. Therefore, the EPA includes regulations to cover both under its nitrogen oxides requirements.

Engines that run at higher temperatures and have greater amounts of oxygen in combustion produce more nitrogen oxides. Regulating these factors can reduce emissions of nitrogen oxides from diesel engines.

Hydrocarbons (HC) can be dangerous for the environment by contributing to the development of ground-level ozone. Humans breathing air with HC have greater chances of cancer and respiratory irritations. Reducing HC in emissions can lead to better health and less pollution.

Carbon monoxide (CO) is an odorless and colorless gas, making it undetectable to humans. In excessive amounts, it can bind the oxygen-carrying hemoglobin, reducing the oxygen reaching the tissues and causing carbon monoxide poisoning. CO poisoning can damage organs, cause asphyxiation and be fatal.

Compared to gas-burning engines, diesel engines produce less CO in their emissions because diesel engines typically run with a lean air-fuel mixture compared to gas engines. CO often forms in rich air to fuel mixtures found more often in gas-burning engines. However, due to its dangerous nature to people in large quantities, CO falls under the EPA emissions standards.

Particulate matter (PM) is a more significant concern from diesel engines than from gasoline engines, creating fewer PM. These particulates include unburned fuel, partially burned lubricating oil, ash and other solids, which form spherical particles that leave the exhaust. In diesel engines, several factors contribute to the creation of particulate matter, including:

Because PM includes minuscule solid matter, the particles cause many more problems than gases. Unlike colorless and odorless gasses, particulate matter has soot, which appears as black smoke from the engine.

PM pollution can cause agricultural problems, visibility issues and stains on building exteriors from soot. Plus, it leads to the fouling of air, soil and water. People exposed to PM can have higher chances of lung problems, cardiovascular disease, asthma and premature death. Improving diesel engine burning to reduce particulate matter can make people healthier and places that use these engines less polluted.

Over time, the EPA diesel emissions requirements have changed. Therefore, engines produced earlier have less strict Tiers to follow. Each Tier has a timeline of initial, interim and final conditions. New generator emissions must match the requirements for their production year.

Refer to our EPA diesel Tier charts for more specifics for each engine type.

The first federal standard for off-road mobile diesel engines came in 1994, when the EPA adopted Tier 1 emission standards. Specifically, this standard applied to any nonroad compression-ignition engine of at least 37 kilowatts. Tier 1 was phased in starting in 1996 and continued being the standard manufacturers followed until it was gradually phased out by the introduction of Tier 2.

In 1998, the EPA declared that a new program was underway to reduced emissions from nonroad diesel engines by up to two-thirds. This program would be implemented in two tiers over the course of a decade.

First came Tier 2, which initially went into effect in 2001 for generators producing power between 225 kilowatts and 450 kilowatts. Tier 2 continued to be phased in for various classes of nonroad diesel engines over the next five years.

Some nonroad engines skipped straight from Tier 2 to Tier 4. However, for engines with a power output between 37 and 569 kilowatts, Tier 3 was an additional step toward fulfilling the EPA’s goal of reducing emissions. This Tier was phased in over the course of 2006-2008 and continued to be the standard until Tier 4 was instated.

The current standards for new generator emissions are Tier 4. Signed into law in 2004 and first taking effect in 2008, Tier 4 was intended to regulate both nonroad diesel engines and diesel fuel to reduce particulate matter by 95%, reduce nitrogen oxides by 90% and virtually eliminate sulfur oxides completely.

Note that, while newly manufactured prime generators must meet Tier 4F requirements, emergency or standby generators are still subject to Tiers 2 and 3.

Examples of these generators may include those that provide extra power or offer mobile power on site. However, standby emergency generators don’t have to meet Tier 4F requirements, only Tier 2 or 3 standards. These guidelines apply to standby generators as long as they only turn on in emergencies and supply power to locations that’d experience severe consequences from a loss of energy. For instance, hospitals or servers that route 911 calls are uses for emergency generators.

The EPA requires emergency generators to have inspections to change the oil and filters and check the system at least once a year or every 500 hours. For every 1,000 hours, the units require air cleaner inspections for diesel generators or annually. Plus, diesel standby generators must have meters that monitor the hours the engines operate.

Tier 4F generator technology drastically reduces emissions from diesel engines compared to older Tiers. To meet these standards, new engines must use ultra-low sulfur diesel (ULSD) fuel that has no more than 15 parts per million of sulfur. This new fuel reduces sulfur by 99% to protect the newly required emissions control devices on engines.

Particulate matter (PM) amounts have the most dramatic decrease compared to previous Tiers. For instance, the difference in allowed PM amounts between Tier 3 and Tier 4F requirements for generators producing 130 kilowatts to 560 kilowatts are 0.20 and 0.02, respectively. Therefore, Tier 4F only allows one-tenth of the particulate matter emissions permitted under Tier 3 standards.

To accomplish these standards, more than the fuel needs updating. The technology used to filter and burn fuel needs upgrades to remove dangerous emissions from the exhaust completely. For instance, using diesel particulate filters (DPF) can reduce PM released in emissions.

A diesel oxidation catalyst (DOC) can filter out exhaust through a catalyst that triggers a chemical reaction in exhaust products. This filtration can reduce carbon monoxide, hydrocarbons and particulate matter into water and carbon dioxide. Some generator engines will use both DOC and DPF, especially larger models designed for commercial use.

Another update is exhaust gas recirculation (EGR). This process allows for the re-burning of some exhaust to reduce nitrogen oxides.

To further reduce nitrogen oxides to Tier 4F requirements, selective catalytic reduction (SCR) systems provide a solution. These systems filter exhaust through a diesel particulate filter to reduce PM. Then, the exhaust meets a mist of diesel exhaust fluid in a catalytic chamber. The resulting chemical reaction neutralizes many nitrogen oxides into benign water and nitrogen.

New generators that meet Tier 4F requirements provide a quality investment due to their longevity, improved operations and lower maintenance needs. Plus, Tier 4F generators may have some future-proofing built-in thanks to their advanced emissions control technology. If Tier 5 standards become the norm, existing technology could easily upgrade a Tier 4F generator. The same doesn’t apply to older models that adhere to Tiers 1 through 3.

Is There a Tier 5 EPA Regulation on Diesel Engines?

Over the years, the EPA has upgraded its Tiers to require engine manufacturers to constantly reduce pollutants. The next Tier will be Tier 5, which is currently in development in the United States. For now, we can look to Europe to see their most recently updated emissions standards.

In Europe, Stage V emissions regulations began phasing in during 2018 with new models in 2019 needing to follow the standards. For Americans, the importance of Stage V standards is how they correlate to possible EPA Tier 5 requirements.

Thus far, European Stages closely match EPA Tiers, so they could be a blueprint for a future Tier 5 by the EPA. For instance, Stage IV mirrored Tier 4F. As a result, Americans can view Stage V requirements to see how the EPA might change current guidelines for Tier 5.

The good news for manufacturers is the ability of the existing technology to meet Stage V standards in Europe. Therefore, new generators in the United States likely won’t need to have significant technological upgrades to meet any future Tier 5 standards.

The EPA hasn’t announced any upcoming changes to its Tiers or other changes in standards, so the high-tech Tier 4F generators will remain at the forefront for at least the foreseeable future. Plus, meeting any new standards will require using existing products and parts to slightly boost the current requirements.

Buy Powerful Generators for Your Business From Woodstock Power Company

Now that you know how the EPA Tiers system works, you can have even more confidence in purchasing the correct generator for your business. At Woodstock Power, we provide machines to help you supply backup power for your company. We’re the most notable brand in the industry, working to help our customers get the power they need with a large catalog of generators to browse.

All our generators undergo testing to ensure operation. Plus, they meet the requirements of the EPA diesel engine Tier chart based on their model year. For help with sizing a generator for your company’s needs or questions about how we buy and sell generators, contact our experts at Woodstock Power Company.